Trespasserine and his camera at large in the world again. This time capturing the colour and spice of a very special edge of Arabia: the Sultanate of Oman 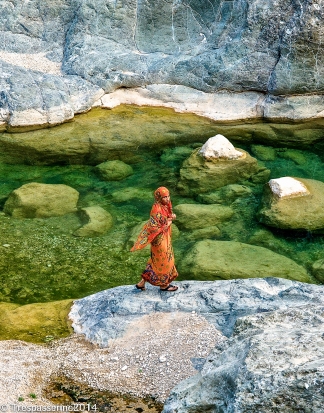 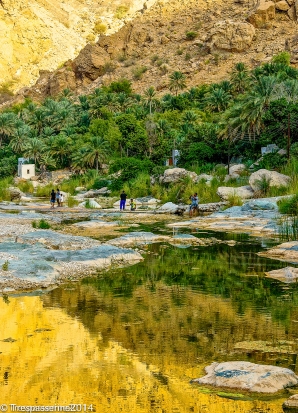 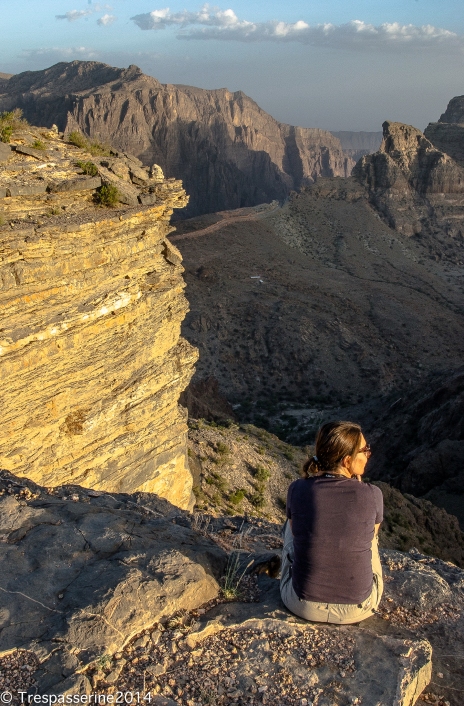 On Oman’s highway 9 running inland from the little coastal town of Al-Khabourah on the road to Muscat, the Batnah plain comes up hard against a bottom row of mountains that would not go amiss in the mouth of a demon god.

Ahlan Wa Sahlan. Welcome to the sublime world of the wadi, Wadi Al-Hawasina to be exact.

The road starts deforming, clamming up in fear as it probes deeper into rugged backcountry. It twists and turns, up and over, around and down. Great pyramids of rock, ultrabasic as the underworld where they formed, are too monumental to tunnel through. So the road follows the geology of Oman by buckling, by going up and over. Few other places anywhere on Earth lay bare the earth’s upper mantle to the atmosphere like here. These are geomorphic rarities indeed, truths that refuse to be buried a second time. The road is as serpentine as the mineral of the same name that characterises these mountains. Serpentine is the green stone, burnished to the most beautiful glazed jade when immersed in the water that courses down the normally dry wadi beds. Serpentine is also, figuratively, the dragon’s blood of this mountain range. Weirdly, the topography is not unlike the teeth that run down the dragon’s back.

Parked under a lone acacia in temperatures topping 100 degrees Fahrenheit, I am alone in a quick-drying riverbed on a scale continental. This is Oman on a cool day. The world’s only Sultanate built on ophiolite rock, here Islam is practiced on hardened molten plastic normally found in the earth’s asthenosphere beneath the kilometres-thick crust that makes the planet habitable. Here, as in a few other spots located on geological faultlines, the innards of the earth seeped out some 90 million years ago. Looking around, I could be in the late Cretaceous without ever knowing how I made it there. Much as I revere my VW Touareg’s capabilities in transporting us into this rugged backcountry, redshifting me back in time is not one of its advertised selling points.

So, I’m parked under an acacia that must be tapping some deep aquifer, the real river under the one that’s been dry longer than mammals have been around. The rock, not unlike human skin, has blistered, dried and cracked under a sun that simply will not relent (unless you call evening a defeat for his coronal highness). What has to be, in its very primordial nature, pristine is anything but. Detritus of the human variety is strewn under trees. Even polymers need cowering from the sun lest they start cracking up, too.

This writer cannot sit for broken glass. I mean, how do you create so many jagged pieces unless you’re a ignorant muppet, probably local, who is so plagued with emptiness in this big, empty land that smashing bottles against geology’s holy grail (not that the locals care for the orogenesis of their Terra Madre) seems like the only fun to have? Or else, maybe what the offending vandals are trying to do here is create a tortured artistic representation of the violence that brought the mountains into being 90 mya.

Two local lads, sitting under the other acacia across the wide expanse of boulders that form the creek bed, spot the foreigner and mosey over. Their tall, skinny physiques shimmer in their white Bedouin dress. If I didn’t know these sorts better, I would take them for a couple of robbing opportunists. But that’s not the way these Omani’s roll. Assault and battery is rarer than a sod of grass in these parts. One asks for a selfie with the white man (who is going a shade of red in the blistering heat). He must be expanding the narrow definition to include himself, myself, yourself, ourselves. We watch the birdie and like that they are gone back to the shabab sitting cross-legged, encircling the tree. The glass glints in the sun. Even an apologist now has to admit the bottle-smashing was an exercise in wanton loutishness, Arab-style, and not wanton art, Dada-style.

The panorama is bleak as it is dazzling. Pillow lava, dark and basaltic. There is no policy to it, as such. It’s enough that the earth is scorched without we scorching it more with our bloody policies.

The mountain at whose base the glass and plastic discards threaten to take a starring role: the gravel, come weeping from the pinnacle in an auburn avalanche, forms a burnt topping. It’s not your average mountain. The iron in them hills makes the mother mountains look all fired and glazed and ready for market. Against a sky mottled by higher than high cirrus clouds going it alone in an island archipelago of blue, the sky is an ocean, the world is a vampire, and the land bearing the whole load belongs to another time and another planet, say Mars.

When the sun starts dipping beneath twenty degrees from the horizontal plane, the mountains lose that glare. What replaces the washed out dictatorship draped in that fake ultraviolet flag are what I like to consider the true colours. A spell is put on the hour. Magic is come. Revealed is the face behind the mask, a face crumpled with ruts. Think of your grandfather and those bristled lines of age you ran your hand down when your hand was half the size it is today.

The strata of rock tells a history of violence even though the only white supremist was the sun and that’s mellowing with age now. Some bands of rock have been thrust up, extruded, born on their belly and sat bolt upright until, like the beaverskin-hatted queen’s guards, they matured into the role. Not even idiotic tourists can irritate these rock sediments into sitting back down. On a promontory a village, who can tell in this desiccated landscape how ancient, lies part in ruins. The bones of man’s archeological past are so delicate as to crumble at the faintest touch. Whoever lived here in the distant past knew how to crush pigments to make paste for topaz walls. They had a flair for geometry, too. Then again, this is Islamo-mundo where God speaks in fractals of geometry. He’s 90 degrees when perfection, and 45 degrees when He is more perfect still. The doors hanging on ruined dwellings (see image) might not lead to perception, yet they do embrace a kind of fleur-de-lys, heraldic beauty. Long after the walls have crumbled, these iron doors will remain upright and non-corroded, like the upturned layers of rock shaping this valley in a bowl.

On the way home the sky behind the mountains is glowing orange. I stop. A wedding party ride by in a cavalcade of four-wheel drives. Bits of bunting flap from roof racks. Horns blow and the hands wave at the sight of the lonesome European standing roadside, bewitched by the umbra that the mountains have now become. The shadow of black serrations. The object between you and the source of light. Finally, after hours, of playing dead under the surveillance of the sun, the mountains finally come to life. The place is alive with the spirits of ninety million years of life on earth, and it’s not quite dark yet.