A fog-shrouded Golden Gate Bridge on entry to the Bay

bound by more than a wheelchair 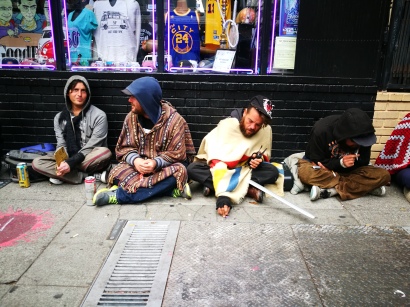 When the street is as good as anywhere 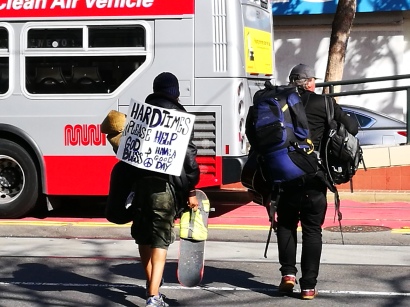 Hard Times but not without a skateboard

He said he was coming back 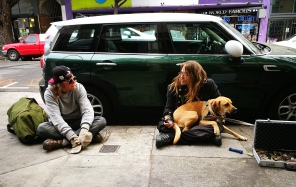 “So anyway, I hear a great little town car.”

Who among you is playing out of tune?

A soapbox delivery minus the soapbox or the listening audience

When the BART becomes the school of dramatic arts

San Francisco bay has long been a draw for the weird, the wonderful and the downright down and out.

Attracted by boundless Pacific sunlight and a tolerance bordering on the UV intense, today the city continues to watch America’s misfits pour in from all quarters. Some are drawn to an alternative lifestyle while others are not so deliberate in where they choose to hang out. The plain fact is that San Francisco, particularly around west Market Street up to Haight Ashbury, provides a kind of sanctuary to many sorry men and women whose psychiatric troubles would be better treated in a more centralised asylum. Instead, the old lady of the bay, San Francisco, IS the asylum. Except, this asylum is growing pricier by the day while its homeless population grows more prevalent but not more equipped to meet the economic (and dare i say psychological) bare necessities of existing in one of the world’s cutting edge metropoles.

In spite of the sometimes vexatious experience of walking San Francisco’s colourful and crazy streets, there’s yet so much life in the place, so much occasion to both weep and whoop at the state of the world.

San Francisco is one of those rare entities: a refuge where both the botched and bungled and the bold and beautiful have an equal share of its pitched paving stones. A screwed-up symbiosis, sure, but a symbiosis of tech and counter culture nonetheless.

Not to speak of its architectural beauty in a blessed natural setting. That is a whole other story.