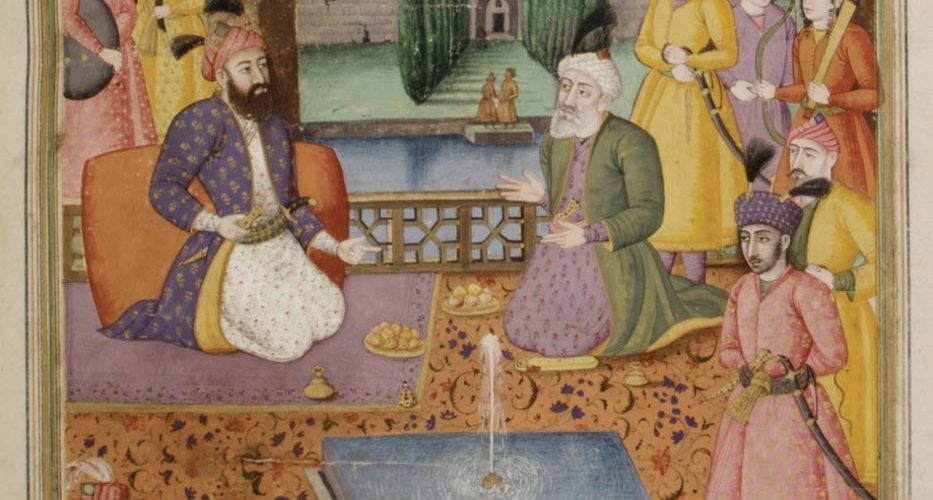 I watched a riveting BBC4 documentary last night called ‘The Art of Persia’. Contained within that visual treasure trove were cultural jewels of incalculable worth. The West might look on with a mixture of bemusement and disdain at the black chadors, the mass weepings, the ceremonial burnings of Imperialist flags of red, white and blue, and the tales of woe spun by Persia’s disgruntled diaspora everywhere from Tehr-Angeles to London, but that’s not the half of it. The country known since 1935 as Iran is arguably as great a continuous civilisation as there has even been, anywhere. But what makes Iran so interesting is how its personality traits reveal a duality deep in its cultural psyche.

To the Persians, who live either in wealthy North Tehran or else abroad, the name Iran is anathema to them because of its proximity to all that is humiliating to a once insuperable civilisation. To them Iran equals the puppet Shah. Iran equals fanaticism. Iran equals paranoid pride. Iran equals vice and virtue and blasphemy and stoning and vicious assaults on the freedom to think out loud. Iran equals secret shindigs with homemade grog. Iran equals ousted premiers. Iran equals the Ayatollahs. Iran equals political prisoners. Iran equals implacable hostility to nearly everyone except fellow villains, Russia and Syria. The name Persia, on the other hand, conjures nothing but antiquarian admirers. The Iran we know today, in stark contrast, has nothing but perceived enemies. On top of this litany of woes, for Persians the name Iran strikes fear into the heart because it equals Islam in its most austere form of submission and at its most fervent. To those Persians who see themselves as secular patriots – defenders of 4,000 years of unique culture, rather than defenders of a faith imported from impoverished desert lands – Iran in its present state will eventually be consumed by the larger meaning of Persia. For everyone, including Orientalists like me, Persia denotes the literary romance of Sheherezade in the 1001 Persian Nights and the Shahnameh of Ferdowsi. Persia is the Rubaiyat of Omar Khayyam; of intoxicating poetry recited in a garden of red roses, crocuses and pomegranate trees; of revelling in the NOW instead of waiting on God, as is the wont of modern Islam. Persia is the Sufi mysticism of Rumi as opposed to the stripped-down demystification of latter-day political Shi’ism.

To the Iranians, who live everywhere else in Iran’s hinterland, Persia is something to be taken, if not lightly, then with a degree of scepticism. Persia equals complicity with the predatory West. Persia equals lingering resentment of being conquered by an inferior culture who brought a book – the Qur’an – which changed everything. Persia equals ambivalence, at best, toward the idea of Islamic piety. Persia equals antiquity, an age that’s gone forever. Persia equals wine and hedonism from the quills of drunken poets who saw things very differently from the Mullahs and the Ayatollahs. Persia equals Zoroastrianism and the fire temples of old. Contrarily, Iran equals Shi’a, a tough, oppressed, self-flagellating branch of Islam. Persia equals all that is effete: of brocades and silken rugs; of grand viziers in courtly costume; of silver filigree and lapiz lazuli glaze on priceless urns; and, of artistic depictions too close to iconoclastic for comfort. In short, for Iranians, nostalgia for old Persia is the antithesis of political Islam. It is a weak underbelly that allows outsiders to enter the forbidden gates on the pretext of weakening the present land by exalting its past.

The BBC documentary highlighted this duality as such. Uncovering the many layers of Persian culture we learn that when it comes to a civilisation that stretches back to the Elamites at Susa 4,500 years ago, an empire that during the reign of the Achaemenids under Cyrus stretched from Greece to Afghanistan, a simple either/or will not do. When something is that old and that far-reaching, dichotomies are rarely that simple. The BBC4 series taught us that even the political Islam of the 21st century Republic can not wash away that feeling of distinction held by so many Iranians. Their exceptionalism chimes with similar exceptionalism experienced by Brexit Britain and the Trumpite United States. It is this analogue with great Western powers that plunges modern Iran into a state of competitive hostility with them. It is the similarities therefore, and not the differences, that explain the fraught relations between the anglo-American West and the new Persia.

Eternally unknowable and all-mighty for being so is what makes Iran so much like the God of Islam it has worshipped for nearly 1,400 years. A bruised civilisation in such a battle for true identity on the shifting game board of power politics is what makes Iran the Persia it truly is to this day, and likewise what makes Persia the true Iran it has become. Its place at the head of the table of nation states has become problematic, none more so than within Iran itself. This was the first civilisation to claim the one true god, Ahura Mazda. Its official state religion of Zoroastrianism was as long-established as Persia itself. But all changed so suddenly. Zoroaster’s fires were extinguished by the Arab Conquest of 637AD. In many respects, an inferior culture usurped one whose deeds it could never match. A tribe tamed a civilisation, and I don’t think Iran has ever come to grips with that. Alexander sacked Persepolis in 330BC, but he razed it to the ground supposedly in the name of Hellenic Civilisation. The Arabs who swept into Sassanid Persia on the command of the Caliph Umar just four years after the death of the prophet Muhammed were a tribe of tribes with all the ostentatiousness of a Glastonbury festival-goer. They came unadorned and, other than tax and sovereignty, demanded little else. These bedouin Arabs were no Islamic State. Their relative tolerance was their enduring power. As the documentary states, Islam was adopted in Persia at a rate that Arabisation never ever was. The Persians took the commandments of Muhammed readily enough, though it was the language and cultural traits of the invaders from the Arabian Peninsula that had little staying power in the eyes of a people who believed, rightly of wrongly, that they had nothing to learn (other than the revelations in the Qur’an) from these usurpers in their raggedy clothing.

I taught a bunch of Iranians about ten years ago, all of whom had come to the West not so much for a taste of cultivated learning, which of course they could have delved into at home. They came, rather, to throw off their chadors and to relive the secular freedoms their parents had enjoyed under the Pahlavi dynasty. They came to change Iran not from within, which was too dangerous, but from without. Away from the Iran of the Basij and the Revolutionary Guard they could embrace the Persian in themselves, throwing off the shackles of the Iranian who boarded the aircraft in Tehran. In our ignorance, some locals asked if, being Muslim and existing in the heart of the Middle East, they were Arabs. The Iranian reaction was prompt and dismissive to say the least. You could actually see them wince at the mere suggestion. In my classroom there they sat together, far from the ethnic Arabs who were seated at the other end of the room. They looked and spoke different. They carried themselves differently, for unlike the Arabs in the room, the Persians had a dual identity: the one Iran foisted upon them at birth, and the Ferdowsi-reading Persian residing permanently in their heart.