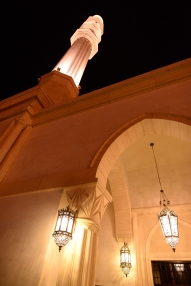 A soapstone impression of Istanbul’s world-renowned Blue Mosque, this one, the second-largest in the Emirates, is going to wear its lines most handsomely into old age.
In fact, when all around is but an historical artefact seized back by the hungered and encroaching desert, geologists of the distant future will be looking upon the defiant structure of its mighty minarets (by then three will be fallen but one will still be standing tall and proud). As for its architectural centrepiece – the dome – the birds might have moved into the cracks of its pocked surface, but the dome will still be a dome while the world remakes itself.
Some things in life were built to last.