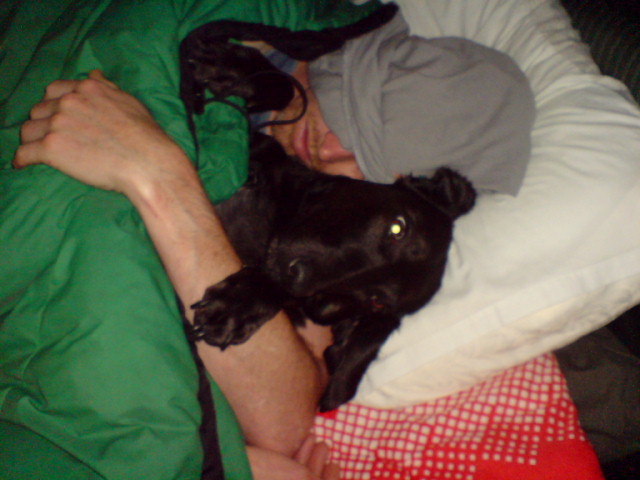 He passed away three years ago yesterday. There was nothing could be done. Dogs cannot describe their symptoms, only in as much as their physical discomfort speaks it for them.

He had been limping badly for months. I had taken him with me to France four months prior to his death and even then it was evident that walks in the vast forest of Compiegne were not the wondrous canine adventure they had once represented. Indeed, the very sight of the tree line stretching away toward Paris had brought to those transparent eyes at best a look of indifference, at worst dread.

Initially, I thought it was hip dysplasia. The way he was going lightly on his hind quarter suggested a mechanical ill-fit or maybe rheumatoid arthritis. For a dog born in the Eastern Mediterranean, a life in damp NW Europe might well be leaving him singularly susceptible to the fraying of those Aegean bone ends. A visit to a vet confirmed the hip theory. A shot of cortisone later and Harry was bouncing on a new set of shock absorbers. To my dismay and his quiet disappointment, this spring in his step soon ran out of tension. Within a week he was back to his old moping, hobbling self. He walked through that beautiful forest as if each and every step was shot with pain, his likeness stabbed with pins by juju witch doctors in a far away forest. His pain was my pain, and much as i did not want to accept the fact, he was going downhill rapidly.

When neither relationship nor job failed to satisfy, i took Harry home to England. I remember well him sitting serenely on the back seat of my VW as we boarded le Chunnel in a freight transporter. I swear, it was as a passenger in a car that Harry loved best. Sitting on his haunches, watching the world go by with the sort of knowing one associates with a previous life. That’s how I remember him three years after he went from my life.

Back in England, his condition deteriorated, his mobility reduced to cinders. The woefulness in his eyes could have melted the heart of the iceman. Unable to bear this rapid demise I was witnessing, Harry was taken for a second opinion. Within minutes, the trusted Yorkshire vet located the pain not in his hip but rather in Harry’s knee. Just as i had suspected! The French vet had been wrong all along, and not only guilty of medical incompetence, he had also acted with a pomposity and peremptory manner i had elicited from no other Frenchman or woman, in spite of their global reputation for cutting off that Gallic nose despite that Gallic face.

When the vet’s roving hands hit the weak spot, Harry curled his lip, baring those ferocious gnashers. It was his wont when someone touched him off-limits.  An ACL – anterior cruciate ligament – rupture was the Yorkshire vet’s diagnosis. Now, this is a sporting injury by any measure. In footballers it is treated with six-months of inactivity followed by stringent rehabilitation. In dogs, however, the snapping of the ligament necessitates the same response as a racehorse breaking its leg. Undaunted by the vet’s gloomy prognosis, horrified by his offer of instant mercy, I mobilized the troops within to invade the headspace that would become the colony of ideas. What could be done? Dogs manage on three legs, don’t they? Better their three than our one, right?  Soon, it dropped like rain from the sky. The solution lay in the pioneering science of orthotics. If they could mould a stifle brace to the knee of an injured horse, by God they could do it with a dog a tenth of its weight. A few resourceful calls later, and I had my deliverance. American technology had gone Transatlantic, allowing a whole generation of dogs with mechanical injuries the chance of a second life.

Returning to the vet, I told him of my discovery. Impressed, excited by this development, he went home and read all about it. Calling me up, he seemed buoyed and ready immediately to make a cast of Harry’s knee joint. It was arranged then, to take my bewildered and inconvenienced dog boy off his comfy bed and in for exploratory treatment the following day. I had resigned to spending the next year as the dog’s de facto physio. What the hell? I had parented him for nine years, so this was the least I could do.

That evening the weather took a turn for the worst. The cold snapped, as it had nine years before, the day I found him half-drowned, half drenched, half-dead at the foot of a mountain at the other side of the European continent. My friend, and Harry’s second favourite person in he world next to my father, had come to visit. Out into it the three of us ventured. Harry loved having his dad and his uncle chaperoning him. We had his back. The snow floated down in fat flakes. The sight of it gave Harry a new lease of life and into white wilderness of the village he forayed. His demeanor had visibly improved. As always, Harry knew. I don’t know how. He just knew. This pain would soon abate and like the pensioner after the hip replacement, the old eyes would regain their youthful sparkle.

And then it happened. He slipped on ice and went down. Bang! We could hear it. Like an explosion inside his knee. Helpless he lay there, in the snow, ashamed to be collected up, afraid to be left alone. I laid him down on the sofa and for reasons I still cannot fathom, left him there with my Mum & Dad while I fled to the ignorance of my friend’s place. In our hearts we both knew that this was a fall Harry could not come back from .

The following morning, I collected his heavy self up and carried him to the car. Quite what he thought of all this I still cannot say. For a mutt with a prescience he was remarkably inexpressive about this, what would come to be his green mile. When the vet met me it was with quickened steps. ‘Yes,’ he uttered, excitedly. ‘I think this might actually work.’ When i lowered Harry onto the treatment table, the vet’s face fell almost as fast a the dog’s legs from under him. ‘The other one popped last night,’ I said. ‘He went down like a stone.’

He was dejected for me.

‘I am sorry,’ he replied. The man’s eyes said that orthotics was no longer the pioneering voyage worth taking.

Both Harry’s ACLs ruptured within days of one another. The rehabilitation, in the vet’s learned opinion, would be monumentally difficult for both owner and dog. His quality of life had now been scythed from beneath him and at the age of 9, could not be recovered so readily.

Watching him buckle and fall each time I stood him on all fours was about the saddest thing i ever did see. With a tacit nod the vet brought out the death warrant. Never had i signed something off with such a lack of flourish. I held him as my friend looked on, his eyes welling with tears. The dog never much liked surgeries; now less than ever. The vet approached with a sedative encased in a large needle, yet for each time he tried to find a vein, Harry rounded on him, snapping his jaws, flashing his teeth. Once the needle had gone in, still he would not lie and capitulate to his fate. Harry had fought death from the moment i found him as a sole survivor in a family drowning in the wilds of the Greek Peloponnese where he had been born illegitimate nine years before. When I picked him up shivering and bleating from that waterside on that cold January day in 2004, he was smaller than my hand, his heart a beat away from infant mortality. With warmth, love and condensed milk I fought for him then, yet here was me now, complicit in his premature death. For this he could not abide me. Another needle went in and like a great lumbering beast his head began to swoon. Now sedated, we lay him down on a blanket on the surgery floor and i kissed his beautiful head while the vet prepared the death serum. From the moment the heart-stopping liquid coursed through his veins, he was gone from me. Nine years on life’s journey with him and the serum had kicked him off the train as quick as that.

Nudging my head into his, still warm, I tried saying goodbye but it seemed insincere. Why farewell him when I would see him again some day? I didn’t know where nor in what guise, but I knew he would come calling again, in a daydream, in a traffic jam when least I expected it.

2 thoughts on “Gone But Not Forgotten”