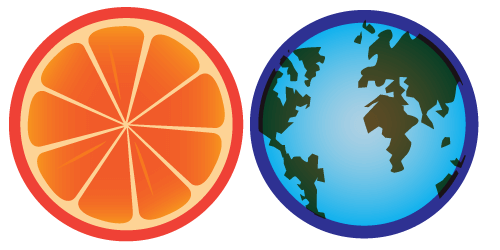 What note should we start playing to get this riff going? A few major milestones have been reached this week, both personal and impersonal. We’ll start on a personal note then.

It’s funny how nature wastes nothing, even in the recurrence of words both delivered and received in the course of our lives. A case in point, five years ago – years that feel to this writer like they belong to another dimension of reality – a quite splendiferous woman loomed over my recumbent frame, held out her clasped fingers and, in a theatrical rendition every inch Hamlet holding Yorick’s skull, said La Terre est Bleue Comme une Orange. She then repeated it with added French verve, La terrrre (actus dramaticus – herein she made the letter ‘r’ in terre sound sexily gutteral) est bleue (for this word, her lips were pursed to bursting) comme une orange. Et voilà!

If the phrase weren’t so nonsensical it would be irresistible. Coined originally by the formative surrealist, Paul Eluard, the sentence translated as The earth is blue like an orange. A phrase still etched into the cultural subconscious decades later, it became a motif for the surrealist movement. And I mention this because I picked up a Guardian article this week on surrealism and lo and behold there it was printed plain as day. La Terre est Bleue Comme une Orange. And at moment those memories of that girl whose natural self-effacement and feelings of not ‘être a la hauteur’ – being ‘good enough’, in other words – derailed her dreams of the stage, were brought back to me in a flood of blues and oranges. As she, like Eluard’s blue planet of citric fruit, never really disappeared from consciousness, I thought of the untimeliness of recurrence. It all comes back, but where and when who can tell. The waking dream that is life, now there’s the essence of the earth blue as an orange. What better way to make real what is surreal?

In other news, Paris is drowning. As the mighty Seine creeps higher and higher, even the doors of the Louvre have been sealed and the priceless artefacts contained therein boxed and evacuated. When the Luftwaffe reigned the skies back in the summer of 1940, the British Government did likewise by stuffing the Royal family into crates cushioned by scrunched newspaper, ready to ship them out to the Canadian Arctic where they could chill a while until Churchill had downed enough of their VSOP brandy to come good on his oratory.

The central European whirlpool of rain has been biblical. Cars bobbing on a rushing torrent of brown, churning water like they were rubber duckies. Although Europe has been on the receiving end throughout recorded history – think the rains that turned the 100 years war between England and France into a mud-bloodbath – there’s something disquieting about the extreme force with which mother nature is throwing atmospheric phenomena at us. Newton’s Third Law is exaggerated with these rains. For every man-made action there is an unequal and disproportionate reaction on the part of nature. The more we push her, the harder she’ll push back. Environmental provocateurs beware.

Speaking of counterbalancing forces, the holy month of Ramadan falls this year on the eventide of the 6th or 7th June, depending on the appearance of the moon. From the elliptical sighting of the new moon early next week, that being the start of the ninth month of the Hijara calendar, to the elliptical closing a month later, the overwhelming majority of Muslims will let nothing, other than words, pass their lips between suhoor (sunup, about 4am) to iftar (sundown, about 7pm). Wherein most of the Islamic world exists between the horse latitudes of twenty to thirty degrees north of the equator where deserts proliferate, the 40-45 Celsius heat at this time of the year by any reckoning makes 13 hours of abstinence a feat worthy of respect. That is, until you factor in the little problem that in the present reign of King petrodollar the benefactors no longer live a life which involves stepping outside for all but the briefest of moments.

In the oil-rich region known in Arabic as Khaleej (the Gulf), the economics of affluence and the concomitant greed that ensues throws dim light on the whole notion of self-sacrificing acts of the magnitude of Ramadan. Admittedly it’s only a small corner of an Ummah (Muslim community) extending from Java to Morocco, yet the Gulf, by virtue of no longer being a humble place, is a destabilizing influence in terms of the authenticity of these religious acts of poverty and humility.

Unlike the rest of the Ummah, dispersed as it is throughout lands described at best as developing, at worst as failing, the native population of the mega-wealthy Gulf has gotten so used to being served hand over fist since the fruiting of oil in the 1980s that to perceive many of them serving anything but themselves is a tricky proposition. So accustomed to having others do their cleaning up after them, even if Ramadan remains an important force to moderate human excess, you wonder if during the month of remembering the plight of the poor, self-purification for some might be a bridge too far. The cloak of obligation suddenly feels a whole lot heavier.

Not to exaggerate the point, Saudis themselves testified to these very ears that they cram more into their beaks every night of Ramadan than any other time of the year. They actually put weight on in a time of fasting, if you can see the paradox in that.

Enjoying excessive spending power has an endgame, which is crass consumerism for consumerism’s sake. Adopting the de facto title of ‘home of the mega mall’ belies a deeper irony come the month of Ramadan. Floating free in a bubble of wealth, confusing lucky oil money with rights of entitlement, is inimical to the earthiness of Ramadan, and the moral hypocrisy that flows from the disjuncture is not lost on some. For they know that to make any sacrifice that requires extreme self-denial you’ve got to to feel it in your bones, and passionately. Doing it as a necessary duty, because not to would land you outside the community bounds of acceptance, isn’t enough. Remembering the plight of the hungered is a memory that is bound to fade the more complacent a people become through having affluence which can only be described as surreal.