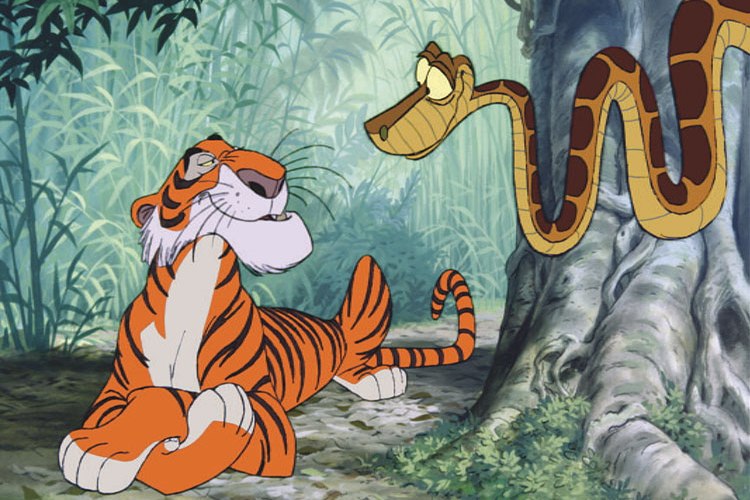 If a little oozing of enchantment is what you seek, then you could do worse than tune into John Favreau’s revamped Jungle Book. It’s not only the husky sibilance of Scarlett Johannson playing Kaa, the reticulated python, that has the power to seduce. The film is a joy the equal of the 1967 classic, but behind its tableaux of trees, vines and strangler figs there is wood to be seen. And much of it is has been either trimmed and replanted or else sawn and turned to pulp. Global population has doubled since 1967, as has India’s population. This effect on India’s jungle forests has been inversely proportionate, giving a new spin on the book and a whole lot more import. There’s a lot of book to be had from this story but, tragically, not a lot of jungle.

It’s hard to conceive of a better tonic to cure the sickness of the postmodern soul than to pop those 3-D glasses on and sit back while Mowgli romps through a wild and woolly wilderness dreamed up to great effect in a room somewhere in downtown LA.

Whether you happen to be eight years old and have yet to reach the age of consent, or forty-eight years old and have reached consent but not yet the state of content, it matters not a jot. This is a film for sharing, for panthers and tigers alike. The Jungle Book has a universal mandate to bring us back to where we once belonged. Fifty years after the original hit the screens, seeing the remake is a summons to the dormant Mowgli within, to the you who used to make rope swings on tree boughs before manhood tied a noose around the end.

If teasing out the lost primordial within ain’t motive enough, then the prosecutors of the film can offer another two: CGI technology allowing the filmakers to take anthropomorphism to heights that are credible to the mind and soaring to the heart; and an ecological subtext which could not be more timely, even if you called Colombo in to investigate. Let’s face facts, there is not one among us who is not a zoophilic somewhere in an interred stratum of his being, who doesn’t love animals that can lip synch, who doesn’t secretly dream of being raised by wolves and still emerge as a well-adjusted little looker. I mean, how unbelievably cool would it be to have a sentinel of a dog dad laying down the law of the jungle to the pack from atop a rock, a little brother called Grey whose lupine beauty could steal the heart of even the ardent of hunters, and two guardians, one a schoolmasterly panther of lithe proportions and the other a honey-loving sloth bear with a sense of wryness reminiscent of Bill Murray. Flanked by those homies you have more of a dream team, the jungle’s very own Harlem Globetrotters. What ten year-old boy could ask for more?

In our age of conscious uncoupling from the forest that mothered us through our species infancy, the very sight of Mowgli’s pandora-like world is enough to stir the Eden child in all of us. It was not all that long ago that such jungles did extend across the Indian subcontinent and right around the entire girth of the planet. The reality, nonetheless, is not quite that depicted in the film, for the Indian wilderness no longer envelops isolated villages, and fire is not the last line of defence against an overwhelming opponent in the all-creeping, all-conquering form of nature. Probably the inverse is true nowadays. The wilderness comes in pockets protected by law while the urban jungle does the marauding. The man-cub has come of age as the wolf, but not the kingpin of natural harmony who does the trophic cascading in Yellowstone NP. No. Rather this wolfman has Shere Kahn on the run. Wildlife groups report an upturn in the fortunes of the Bengal tiger, but those increases in numbers reported may be attributable merely to better detection. Again, wherein the Shere Khan of the Jungle Book shirks from no man, the truth is that our tiger-spotting techniques are only as ineffective as the real Shere Khan’s effectiveness in using those tiger stripes to blend in with the elephant grass; to stay the f**k away from us if he knows what’s good for him.

When Kipling wrote his batch of stories in the 1890’s, the British Raj were bagging big cats quicker than they were bagging countries on their imperial monopoly board. The difference being, though, in the 1890’s India’s wilderness was deep as it was pervasive. The civil engineers trying to cut the Indian railway system across near-impenetrable forest, and the track-laying coolies frequently the victims of ambush by Bengal tigers will bear dead witness to that fact. The trigonometry of mapping India was amazingly complex not because of the calculations involved but because of the logistics needed to cut a swathe through such dense jungle-forest to triangulate the readings in the first place.

The philosophical themes around civilisation and savagery alive in Kipling’s Victorian environs would have juxtaposed man and nature and where possible would have allowed a vibrant and imaginative literature to jemmy open the shut case of man and nature as separate and mutually inimical, as well as civilisation as equalling that which is built on, and savagery as what is let be. Again, it was literature’s role to gainsay these crudely dichotomous worldviews. Savagery could be noble, and none more so than when it came in the guise of the great beasts. When we find a common tongue between man and the beast, does man elevate them to his noble-born stature or, like the inexorable march of all things organic, is he subsumed down to their base level? These questions the Jungle Book raises.

One hundred and twenty years on, and the questions of ontology, of man’s place in nature, remain. Except now, man’s red fire really is burning out of control (as Kipling’s animals prophesized). A water truce has been declared by all jungle creatures great and small, and not because of lack of rain, but because of lack of space. Their world is shrinking and with it ours. For this reason, among others, the Jungle Book continues to exert such a magical, if haunting, presence in the core of us. With the auto-destructive power of the tiger, the cunning ingenuity of man, and the ultimate restoration of natural balance as the story’s leitmotif, its themes are as redolent of the world of today as they were in the heyday of the Victorians, whose imagination immortalized this unforgettable cast of characters. And boy, do they look good. But beyond the magic of the characters, there lies the sorcery of modern economics, doing the devil’s work deep in the forest of the boy’s imagination.